VIA: When LeBron James chose to go back to the Cleveland Cavaliers this summer, the common consensus was this would be James' last move in free agency. After all, how could he possibly leave Cleveland again after his homecoming?

Though James is only on a two-year contract, it's been widely assumed that it's simply for financial reasons.

However, with the Cleveland Cavaliers struggling early on, some are starting to speculate — and some teams are even hoping — that James could once again take his talents elsewhere.

Making speculation more rampant, somebody on Reddit has discovered a video in which James can be heard possibly suggesting a reunion with former teammate Dwyane Wade down the road.

The NBA-produced video is a collection of highlights from the Heat-Cavaliers game on Christmas Day. At the end of the game, James and Wade embrace and begin talking.

As the video fades out, James can be heard saying what sounds like, "Like I said, if we aren't better this year, we're gonna re-unite again and do some bigger and better things, alright?"

There isn't video of the quote — the highlights fade out into a page to subscribe to the channel — so we can't read lips or even decipher physical reactions from either player.

But what else could that mean?

This also surfaces after reports of dissatisfaction with head coach David Blatt and James being willing to leave Cleveland if things don't go as planned. While Dwyane Wade has said he wouldn't want to form a Big 3 again, this could be construed as an arrangement the two agreed upon before James left Miami.

Or it could be a number of things. The Cavaliers are only 31 games into their season, and the youth of Kyrie Irving and Kevin Love suggest a higher upside than James, at 30, reuniting with Wade.

NBA reporter Ethan Skolnick tweeted that this isn't outside the realm of possibility: 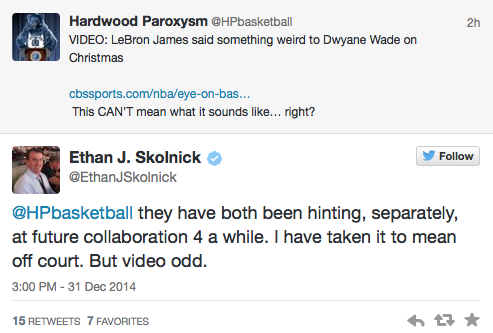