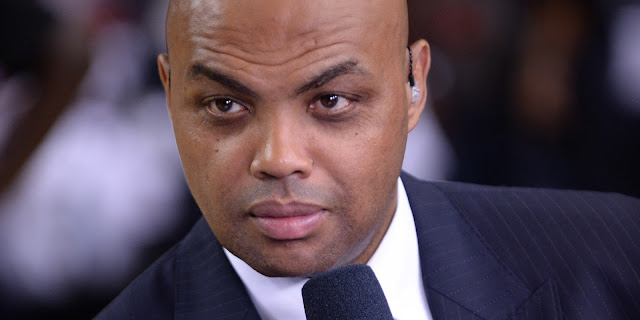 There is no athlete or TV personality quite like Chuck. Never one to shy away from what is on his mind here are Charles Barkley's top 50 quotes of all time.

49. "You got to believe in yourself. Hell, I believe I'm the best-looking guy in the world and I might be right."

47. "We better not be doing the Bulls this year. Man, they suck! Bunch of high school kids with $70 million contracts. Damn! I hate my mother for having me too soon."

46. "You can talk without saying a thing. I don't ever want to be that type of person."

45. After retiring from basketball "I'm just what America needs - another unemployed black man.

44. Ernie: "Did they recognize you in South Dakota?"
Charles: "Yes, they did. It was easy because I was the only black person there. When they see me walking down the street they say 'There he goes again'. And when I come back the next year they say 'He's back yawl!'"

43. Right after Peja won the 3-point contest: "Kenny said it was going to be an all-international night. I want to know which international brother is going to win the slam dunk contest."

42. On the Enron scandal investigation: "Almost all those politicians took money from Enron, and there they are holding hearings. That's like O.J. Simpson getting in the Rae Carruth jury pool."

41. "I had to explain to my daughter why that skank Monica Lewinski has an hour special on HBO this weekend."

40. Ernie: "Auburn is a pretty good school. To graduate from there I suppose you really need to work hard and put forth maximum effort."
Charles: "20 pts and 10 rebounds will get you through also!"

39. "Every time I think about changing a diaper, I run a little bit harder and a little bit faster to make sure I can afford a nanny until my daughter's old enough to take care of that herself."

38. EJ: "Did you graduate from Auburn?"
Charles: "No, but I have a couple people working for me who did."

37. "Dick Bavetta and Moses parted the Red Sea together."

36. Ernie Johnson, on Reggie Evans being caught grabbing the rocks of Chris Kaman: "(Reggie Evans) got caught with his hand in the cookie jar."Charles Barkley: "Ernie, I don't know where you get your cookies at but the rest of us don't get ours there."

35. On his 17-year old daughter not dating yet: "Thank goodness. I just hope she doesn't start before I go in the Hall of Fame. That way, I won't have to kill anybody before I get inducted."

34. Kenny: "There's guys who go over to Europe and play overseas from America, and they dominate!"
Charles: "Those are called 'brothers'

33. After Wang has a shot blocked: "He's got to bring something stronger than that. That's like bringing milk to a bar, it's not strong enough"

31. "We are in the business of kicking butt and business is very, very good."

30. When the Dream Team was about to play the Angola national team, during pre-game interviews the other USA players provided diplomatic, face saving comments about how they would play hard and felt strongly they would win. When Chuck was asked about Angola and the game, he replied: "They're in a lot of trouble."

29. Charles Barkley on his thoughts about retiring before the season: "I remember sitting down with the Rockets and saying, 'Yeah. I'm going to retire.' They said, 'Well, we'll give you $9 million.' And I said, 'You got a pen on you?'"

28. Man, everything gets blamed on the Clintons, every single thing in this world. I think Bill Clinton shot JFK, too.

27. "I know why his name is DMX. Because his real name is Earl. Imagine if his name was Earl the rapper."

26. "If you go out with a girl and they say she has a great personality, she's ugly. If they tell you a guy works hard, he can't play a lick. Same thing."

25. After Kevin Garnett threw a ball into the crowd out of frustration and was ejected. They showed footage of the man that got hit by the ball being taken away in a stretcher and his daughter was crying. Charles commented that players take passes to the face all the time. He topped it off by saying: "You know why that little girl's crying? It's because she's thinking 'my daddy's a wussy'".

24. Barkley on Ernie Johnson and Kenny Smith eating a box of hot Krispy Kreme donuts in front of him: “Both of y’all are2 going to hell for that. Y’all are going to hell with a first-class ticket. Is that how you treat your partner? Krispy Kreme might be the greatest invention in the history of civilization when they’re hot. Y’all are cruel man.”

23. "It's kinda great to see the Celtics doin well again cuz that was so much fun in my day to go to the Boston Garden and they spit at you and throw things at you and talk about your mom. It sounds like dinner at Kenny Smith's house."

22. "I think that the team that wins game five will win the series. Unless we lose game five."

21. Charles Barkley after seeing a picture of Sam Cassell on the screen: "Phone home." And later he remarks to Kenny, "Sam Cassell is a good guy, but he's not going to wind up on the cover of GQ anytime soon."

18. On the goal of the '92 Olympic Dream Team when playing Panama in the Tournament of the Americas: "To get the Canal back."

17. To Kenny: "Hakeem couldn't kick your ass cuz you were too close, kissin his!"

15. On supersized Oliver Miller: "You can't even jump high enough to touch the rim, unless they put a Big Mac on it."

14. "All I know is, as long as I led the Southeastern Conference in scoring, my grades would be fine."

13. On North Carolina missing 22 of its last 23 shots in losing to Georgetown in the NCAA tournament last weekend: "Stevie Wonder could make one of 23 shots."

11. "I always laugh when people ask me about rebounding techniques. I've got a technique. It's called just go get the damn ball."

10. On the Portland Trail Blazers (back when they were known as the Jail Blazers) serving Thanksgiving meals: "In between arrests they do community service."

9. "Yeah Ernie, its called defense, I mean I wouldn't know anything about it personally but I've heard about it through the grapevine.

7. "When I was recruited at Auburn [university], they took me to a strip joint. When I saw those titties on Buffy, I knew that Auburn met my academic requirements."

5. "I heard Tonya Harding is calling herself the Charles Barkley of figure skating. I was going to sue her for defamation of character, but then I realized I have no character."

4. On the All-Star Game: "Hell, there ain't but 15 black millionaires in the whole country & half of 'em are right here in this room."

3. On Jerry Krause still being able to keep his job as GM of the Chicago Bulls: "Jerry Krause must have pictures of his boss's wife having sex with a monkey."

2. After throwing a guy through a 1st floor window in a bar Charles was in front of the judge.
Judge: "Your sanctions are community service and a fine, do you have any regrets?"
Charles: "Yeah I regret we weren't on a higher floor"

1. After an Olympic Dream Team victory over Angola, in which they won 116-48, Charles got into a physical altercation with a member of Angola towards the end of the game, afterwards he says.

"Somebody hits me, I'm going to hit him back. Even if it does look like he hasn't eaten in a couple weeks. I thought he was going to pull a spear on me."
Posted by Orlando at 1:29 AM